Noah Tucker: ‘Creating new ideas is what gives me adrenaline…’

Noah Tucker – Chef and owner of Ladybird, Ser-vi and Yerba From taking cooking classes at the age of eight, to becoming a cook that many people would want to be. Noah Tucker, an inspiring chef willing to make change within the hospitality industry. 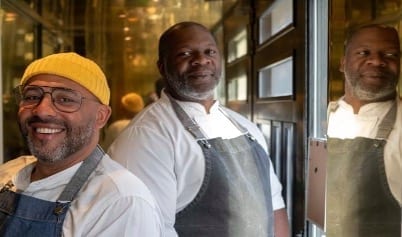 Where the passion started

As a kid, Noah tucker was in love with food. It was something that he couldn’t resist. He was fortunate enough to go to cooking classes during his youth, where he would be the eight-year-old boy together with fifty-year-old women. It always inspired him to taste food, and see what he could do with it. With all the choices in his life, he always tried to keep it culinary.

‘I was in the military for five years and  I cooked there. I lived in Japan and I would cook there as well.’

Later on, Noah schooled at the Culinary Institute of America. Then, pretty much worked and stayed in Michelin restaurants all his life. “I could devote eighteen hours a day to a restaurant, and it was okay”. Even though Noah moved to San Francisco with his wife, he still stayed in the Michelin scene and continued with his passion, cooking. Thirteen years ago he moved to Amsterdam. He believed that he could work with books, media, and apps but stay in the hospitality business at the same time. This worked for him with Yerba, High cuisine and Ser.vi.

For Noah, it was of importance that he could cook, cook and cook. At some point in Amsterdam he had about 5 restaurants together with his partner Tony. Tony is a chef from London, who became Noah’s
business partner and they continued opening restaurants together. The problem however was that they weren’t cooking anymore. Their priority at that stage was to make sure that all the restaurants were doing well. More management and less cooking.

After selling all the restaurants, they helped to open up a new eatery so that they wouldn’t have to be inside the building all the time, and they were able to focus on other companies. In general these two
guys have lots of experiences around the world, and they can implement their ways of cooking and make a change. 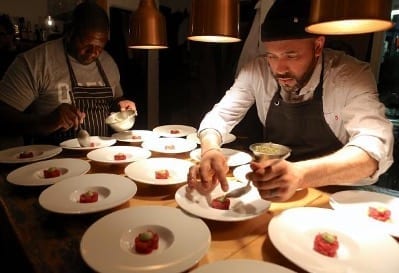 The first restaurant Noah and Tony opened was called Fraiche (Fresh). This was an all seasonal restaurant where they would only cook what was available in that season. This restaurant therefore
allowed them to change their menu once every 3 weeks.

‘We wanted to open a restaurant for chefs, for people that wanted to eat really great food’

It was a small-scale restaurant where the service was very personal. ‘The chefs brought the food to the table and the chefs served the wine’. They wanted to charge a low price, but still be able to serve caviar. They tried to make the restaurant as transparent as possible so that the guests could see it was just two chefs producing high quality food and having the time of their lives. This restaurant therefore was a success.

Unfortunately, they had to close Fraiche due to problems with the landlord. However, this created a whole other avenue for them as they got to open wine bars, barbershops and many different lunchrooms.

What are your current businesses?

At the moment Ladybird is the newest business. It is a pop-up restaurant where you can get the real fried American chicken. This is something that many people crave, especially during corona. Next to Ladybird, there is Yerba (Co-owned with Sally and Walter Marskamp), ‘a plant forward space’. It is a seasonal, vegan restaurant where it is important to include sustainable eating. Furthermore, Noah and Tony are working on High cuisine.

This is a concept where the vision is to revolutionize the dining experience by skillfully using haute cuisine in a very special way. The way of cooking gives a psychedelic effect as they use herbs and plants to raise your high and bring you back too low. This has been recorded onto a show which can be watched on Videoland. Finally, the last two years, Noah and Tony have been busy building an app called Ser.vi. 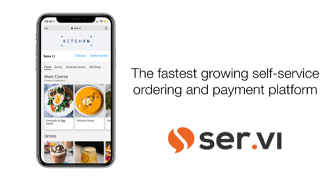 Lately, Noah and Tony have been producing an app which is related to their passion. It is the perfect solution to social distancing during coronavirus. This app is called Ser.vi and allows for self-service, ordering and payment through an application. This app will allow businesses to increase their revenue, to have a better guest experience and lastly to optimize their staffing.

Noah and Tony have seen that it is essential to look at staffing when it comes to the coronavirus, as this is one of the biggest costs at the moment. The app will cover for a couple of staff members as it is not necessary to take orders on a table. All the orders can be placed through the use of a QR code. The only cost is a small transaction fee, and it will make a business more efficient.

What would you advise young entrepreneurs to do?

After all the businesses Noah has had or helped set up, his word of advice would be ‘make sure that it will work in an area where you want to start your business. People will go to New York and see an amazing concept, however bringing this to the Netherlands might not work.’

Place a good focus on making sure that your concept will work with the culture/place you are starting a restaurant in. Another tip is you have to be able to do it by yourself. Of course, it is nice to have a team which can take the world load away from you, but make sure you are prepared to take over.